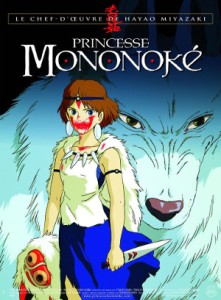 Ashitaka’s village is attacked by a demon that infects him with a curse that will slowly kill him. The village wise woman tells him to travel to the lands in the west where he might find a cure, although that is uncertain.

Most of the action in “Princess Mononoke” takes place during Ashitaka’s journey and after he arrives in the western lands. The time of this adventure is long ago when Gods still roamed the earth.

The music is just as enjoyable as in other Miyazaki movies and it brings out both emotions and moods. “Princess Mononoke” has more of a anime feel to it than other Miyazaki movies, with the classical overreaction faces of the characters and the sounds that go along with them. This is not something that is present often, though.

There is mostly a feel of adventure and fairy tale in “Princess Mononoke” and it has the typical moral messages of older traditional stories. The morals of the story is important and quite easy to get for young and old. Happily, this does not mean the story is simplified or boring.

Once again we see that cutting off one’s own pony tale has some kind of significance in a Japanese movie, but I still don’t exactly what.

The animation is some of the best I’ve ever seen, and while there is some violence, this medium allows such matters to be less graphic. The drawings are both cute and pretty, without being just an excuse for showing off nature and people.

The characters are fantastical, as they should be in a fairy tale, but still human enough for the viewers to relate and care about their fate. The strange thing is that I also came to care for the fate of the forest. Don’t get me wrong, I naturally care for nature and how it fares, but I ended up caring for the forest as if it was a person or character.

The story sits with the viewer for quite some time, and the messages can reach every member of a family. (Also the family members that more traditionally aren’t too concerned with at least some of the issues in the movie, such as feminism and environmental protection.)

“Princess Mononoke” is a fantastic animated movie, maybe the best I’ve ever seen.

“Princess Mononoke” is a very enjoyable movie with a bit of meaning and a good adventure story. I will watch it again many times in the future.

I recommend everyone watch “Princess Mononoke” once in a while to get a reminder of the importance of nature and our relationships to one another.

If you’ve recently seen “Princess Mononoke” (“Mononoke-hime”) or you’re watching along with my year of movies, please leave a comment below with your thoughts on the movie or note down your opinion somewhere else.

If you want to get “Princess Mononoke” from Amazon, here is a link for that. They probably have the movie many other places too. Maybe it’s on a streaming service you subscribe to already?

Tomorrow’s movie is “Stagecoach”. Get some more information about this movie and the other movies on my watch list this week on the upcoming movies page. If you’re new to this site and are wondering why I’m watching a movie every day for a year, read more about my experiment. 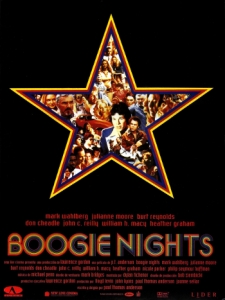 I have not seen “Boogie nights” before, and I liked the movie. The styling of the 70’s and 80’s looked real, and the characters, sets and everything else were given both characteristic and the most fashionable looks for these years. I have often before been disappointed with how these decades have looked on TV and in movies that were made later. (Not always, though. Some do get it right)

The music in the move fits well with the period and gets the viewer in the boogie mood. There are a few scenes where the music isn’t just background, but plays a part in the scene. The scene where Eddie sings is just brilliant in it’s cringe worthiness. These scenes has a very nice use of elements from the time, and together with other things, like the nunchucks, the time comes alive.

There were also many fun ways that movies or movie clips within the movie was used. Quite enlightening when it came to some cinematic stuff as well.

The acting is very nice, and considering the environment the movie is set in, there was little nudity. (Which might be a bonus for some and a negative for others, I suppose.) Don’t get me wrong, there is full frontal nudity, but not more than needed.

All the major characters have stories and development, and part of that is a community around the talented Eddie. They are all outcasts or misfits but together the group finds a place, both as a whole ensemble and as individual characters. The story progresses through some years and the destinies can be seen as commentary on fitting in, on finding a place in the world to be happy, to find a group. And on many other things, such as sex, sexual morality, a variety of gender issues and relationships.

Even if the movie sometimes deals with difficult or serious subjects, it is far from depressing. The cinematography, dialogue and use of colors creates a vibrant and exciting story, rather than letting the mood be set by heavy subjects in the characters lives.

I think “Boogie nights” was a solid movie with a good story and it kept me entertained all the way. I wouldn’t mind watching it again.

I recommend this movie to any adult. It gives a little food for thought and has many good scenes. Some funny, some cringe worthy and some sad. All these scenes come together in a rather unpredictable manner and entertains.

If you’ve recently seen “Boogie nights” or you’re watching along with my year of movies, please leave a comment below with your thoughts on the movie or note down your opinion somewhere else.

If you want to get “Boogie nights” from Amazon, here is a link for that. They probably have the movie many other places too. Maybe it’s on a streaming service you subscribe to already?

Tomorrow’s movie is “Gladiator“. Get some more information about this movie and the other movies on my watch list this week on the upcoming movies page. If you’re new to this site and are wondering why I’m watching a movie every day for a year, read more about my experiment.