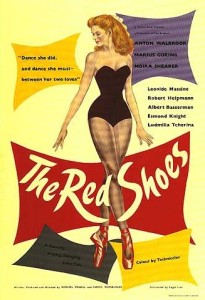 Victoria Page is an aspiring ballet dancer. She is hired by Boris Lermontov as a dancer. In the company she meets the young composer Julian Craster. When Lermontov wants to make Page a star, she must find out what her priorities in life are.

This was a weird one. It is a mixture of two styles and two stories. One story was a quite ordinary tale of a struggling dancer and her rise to stardom in the company. This is filmed in a nice, but familiar way.

The other part was the ballet scenes. The Hans Christian Andersen story of the red shoes was made into a ballet in the movie, and a bit of it is shown to the viewers. There are also other ballet scenes. The feel and style is completely different in this part of the movie and it is quite extraordinary.  I think this must be the part of “The red shoes” that critics has enjoyed enough to put the movie on their top lists.

Before I go on, I should probably mention that I am in no way qualified to judge the quality of the dancing in this movie. I am not very familiar with the ballet, but the lead actress, Moira Shearer, was a prima ballerina at the time, so I will assume that a connoisseur would be impressed by the dancing, and not just me. The same is the case for the music played during the dancing; I am unqualified to judge it.

I have not seen this movie before, but I enjoyed at least most of it.

The acting could have been stronger at times. It was a little overly dramatic, but that seemed to be how it was done back then.

The struggling ballerina part of the movie had a nice and dramatic story, but not overly special.

The ballet part of the story was a visual feast. The dancing, the costumes, the sets, the music, the play of light and shadows and the special effects, it all came together in creative and unexpected ways. Some of the storytelling in these parts were quite simple, but sometimes the simple is the best, and in this case, it was perfect. Also, some of the overly dramatic acting came into it’s right on the stage.

It was with sadness I saw that the amazing dancing and the leading role in the plot didn’t give Moira Shearer top billing. The two men that influence her character in the movie are both billed above her. Absurd.

The story is good and makes good use of “life imitates art” in the plot. However, the choice Victoria Page is faced with near the end seems constructed. I don’t see why it should be a choice at all. This should be a clear case of a situation where Page could have her cake and eat it too.  The movie arguments against this possibility, but not very convincingly.

I liked this movie, even if it had some more ordinary, or less creative parts. I found it well worth my time. I would not mind watching it again either.

I would recommend “The red shoes”  to anyone. I don’t think children under 11 would get a lot out of the movie, but it would not be a problem otherwise if children saw it.

The ballet scenes are simply spectacular, and that comes from someone who is completely unfamiliar with this type of dance.

If you’ve recently seen “The red shoes” or you’re watching along with my year of movies, please leave a comment below with your thoughts on the movie or note down your opinion somewhere else.

If you want to get “The red shoes” from Amazon, here is a link for that. They probably have the movie many other places too. Maybe it’s on a streaming service you subscribe to already?

Tomorrow’s movie is “Breaking the waves“. Get some more information about this movie and the other movies on my watch list this week on the upcoming movies page. If you’re new to this site and are wondering why I’m watching a movie every day for a year, read more about my experiment.

One thought on “The Red shoes”