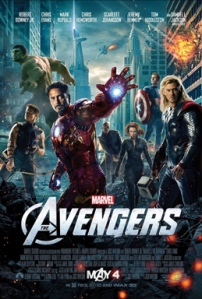 The earth is threatened by the trickster Asgardian Loki and the superheroes of the world must work together to stop him. This assembles the Avengers; Loki’s brother Thor, Iron Man / Tony Stark, Captain America / Steve Rogers, The Hulk / Bruce Banner, Black Widow / Natasha Romanoff and Hawkeye / Clint Barton.

A fun filled action movie with snappy lines and nice relationships between the characters. I enjoyed it thoroughly. I was entertained, and it was mostly just that; entertainment.

I have seen the movie before and still had fun seeing it for the second time.

As a Scandinavian I had the usual problems with Marvel’s Asgardians and just how unlike the old Norse gods Thor and Loki are. However, if I manage to divorce myself from the idea that these are in any way related to the Viking beliefs, and just look at the superhero / alien aspect of these characters, it great fun.

The acting, and the sound and visuals are great, and I even enjoyed the action parts, which I don’t always do when watching these types of movies. It seemed like the characters all had their part in the action, and each of them had a task or tasks, and a logic to what they were doing, rather than someone coming up with cool action sequences that they needed to fit into the story.

The story was fun, but a little on the tame side compared to what I expect from Joss Whedon. My ability to connect to the story, the imagery that makes me relate and maybe  also the innovation where I am taken into an exciting, adventurous reality, in short; the qualities I love so much in his other work, is just almost there. It doesn’t quite hit the mark.  (Or maybe I just miss Buffy / Angel / Firefly.)

Not a waste of my tame at all, and I would like to see it again someday. No problem.

I think most adults would enjoy the movie, but I would warn Joss Whedon fans that while his quality stamp is clearly there, that little something extra from the TV shows of old, is only almost there. “The Avengers” is a fun couple of hours.

If you’ve recently seen “The Avengers” or you’re watching along with my year of movies, please leave a comment below with your thoughts on the movie or note down your opinion somewhere else.

If you want to get “The Avengers” from Amazon, here is a link for that. They probably have the movie many other places too. Maybe it’s already on your shelf?

Tomorrow’s movie is “Blade runner“. Get some more information about this movie and the other movies on my watch list this week on the upcoming movies page. If you’re new to this site and are wondering why I’m watching a movie every day for a year, read more about my experiment.

One thought on “The Avengers”